A stay in Maruka Ryokan is a step back in time.  I am not sure how old the owners of the Ryokan are but their very helpful son appeared to us to be in his seventies!

The best days for this Ryokan have past.  Taps are quaint, tiles around the onsen crumbling and fixtures and fittings have seen better days.  However the linen was spotless and miso soup the best in Japan.  Breakfast was excellent and the hospitality from the elderly hosts has to be experienced to be believed.  A little window to the past.

We were lucky to be given a lift to the snow monkey park by the Ryoken owner’s son.  He had a message in English on his phone to tell us that it wasn’t likely that the monkeys would come out to play.  I just wish someone had said out right – don’t waste your time, but anyway live and learn!

If you go to Yamanouchi in autumn don’t expect to see snow monkeys.  They are too busy making more snow monkeys and don’t bother to come down to their onsen.  We waited and waited with the promise they might come down but finally had to go.  Looking on webcam, even from home it seems they didn’t come down from the hills for quite some time! 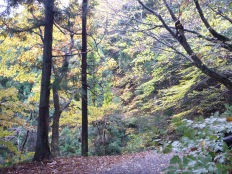 We left Yaramnouchi and travelled by JR train back to Tokyo.  The contrast of the quiet backwater to the hustle and bustle of the world class city was huge.

We rediscovered the Ginza line and Shimbashi station.  We retraced our steps to the Park Hotel and this time we had booked a room with a view- maybe we will see the shy one – Mount Fuji.

So many places to go, people to meet, things to do…